“Change is coming, whether people like it or not” Politics by Mark Pazniokas, CT Mirror, July 24, 2019 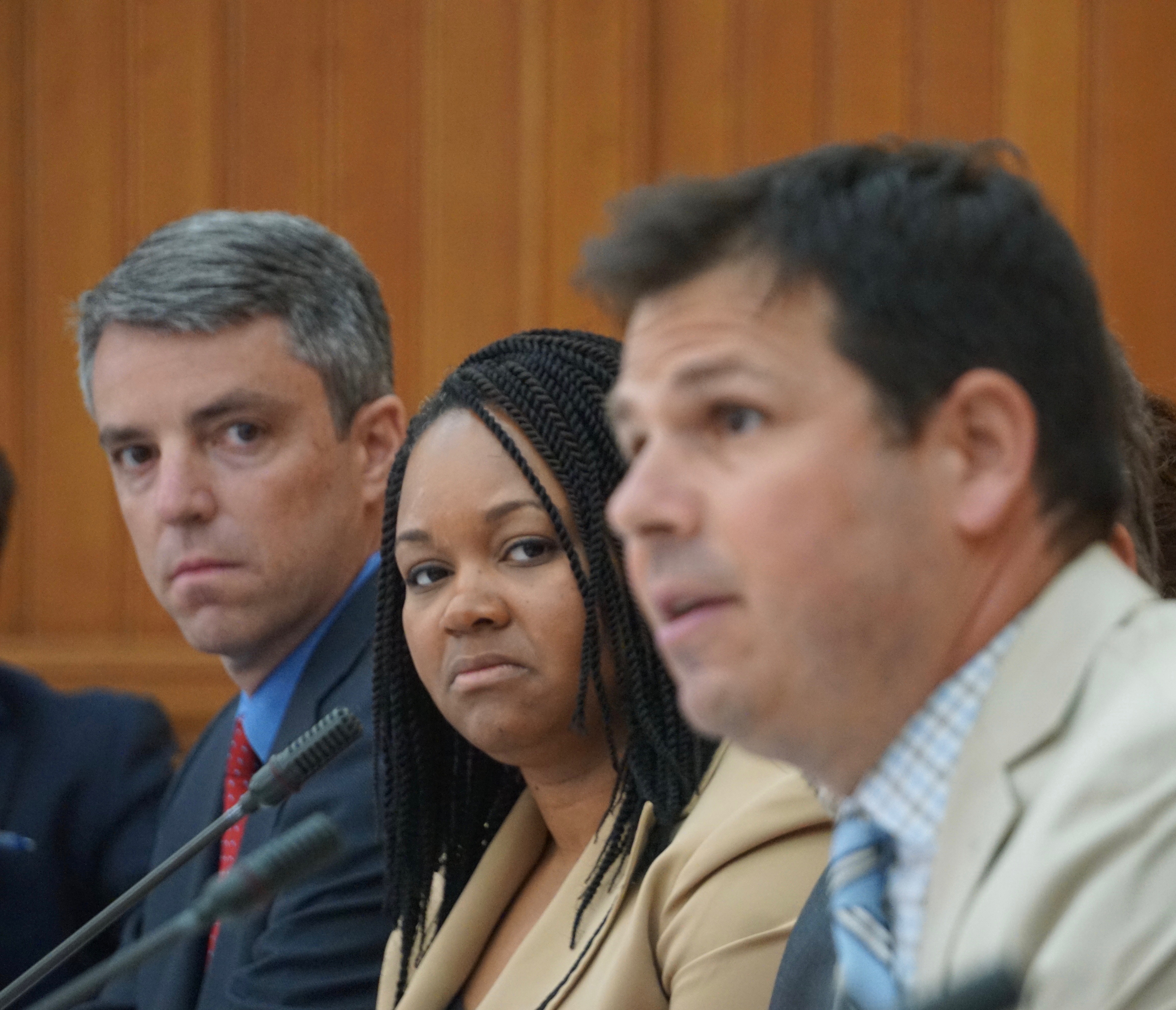 Connecticut’s chief administrative officer keeps a spotless desk. Outside his 15th-floor office in a downtown Hartford complex is a big empty space once occupied by file cabinets. Both are signs of things to come in state government — or more precisely, things to disappear.

“You’ll notice when you look around here, there is no paper. People know not to bring paper in here,” said Josh Geballe, a former IBM executive and tech entrepreneur. “We’re working really hard to digitize everything we do.”

Geballe is commissioner of the Department of Administrative Services, the blandly named agency at the heart of the state bureaucracy. DAS is the state’s landlord and construction manager, its hiring hall and purchasing agent, and, perhaps most vitally in the digital age, its information technology office.

He is one of the mid-career, private-sector executives to join the administration of Gov. Ned Lamont, a cable-television entrepreneur who took office on January 9 and hired Geballe two weeks later. 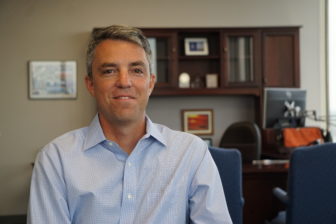 “My hypothesis coming in was that there are going to be more similarities to how we solve some of the challenges we have than differences, private to public,” Geballe said. “With the benefit of five and a half months, I’m increasingly confident that is true.”

Geballe is no stranger to bureaucracies and the opportunities, challenges and necessities of wrenching change: He spent 11 years at IBM, which employs 350,000 people worldwide and preaches that the world is in the midst of a fourth industrial revolution, a convergence of new technologies powered by cloud computing.

Government bureaucracies are notoriously resistant to change, layered with the accretion of rules, processes, union contracts, all contributing to a workplace culture. Administrations come and go, taking with them their priorities. As a federal EPA employee recently told the Washingtonian in a piece about the Trump administration, “I fully intend to outlast these people.”

But the Lamont administration is facing a gathering wave of retirements, producing a sense of urgency that Geballe says is shared by labor and management.

“I think we’re at a time where change is coming, whether people like it or not. A third of the state workforce is going to retire in the next three years,” Geballe said.

By the latest estimates of the comptroller’s office, 14,764 state employees — a quarter of the workforce — will be eligible to retire on July 1, 2022, when a concession deal negotiated in 2017 by the administration of Gov. Dannel P. Malloy takes effect. It will slow cost-of-living adjustments for all new retirees and raise health costs for a few, primarily high earners.

Retired state employees now get annual cost-of-living adjustments: a minimum of 2 percent and a maximum of 7 percent, depending on inflation. There will be no guaranteed minimum for those who retire after July 1, 2022, and their first potential COLA would come in 30 months, not 12.

The comptroller’s office cautions that some those eligible to retire will not yet have earned full retirement benefits, giving some an incentive to stay. But two union leaders say they see the state’s expectations of a significant retirement wave as well-founded.

“We share the concern about what’s going to happen in 2022,” said Dave Glidden, the executive director of CSEA SEIU Local 2001, which represents 5,000 state employees. Its members include scientists, engineers and information technology professionals.

“We have three years to plan for that,” Geballe said. “That’s a big risk, but it’s also an amazing opportunity to reinvent how we do things, to bring in technology to automate a lot of the manual processes that can be more efficiently done by software today.”

Automation is a word that makes unions nervous, even as they acknowledge the nature of work is changing. Sal Luciano, a former social worker who is the president of the Connecticut AFL-CIO, said many state agencies are understaffed.

Geballe said the administration has a vision of where to go with technology, primarily by offering consumers and businesses a digital portal to state government.

In hiring the 44-year-old Geballe, the governor said he was bringing a fresh approach to a state government badly in need of modernization. Lamont called DAS “one of the jobs where we wanted to think a little more out of the box.”

Like Lamont, Geballe is a graduate of the School of Management at Yale. (His mother, Shelley, a lawyer and professor of public health at Yale, is a founding board member of the nonprofit Connecticut News Project Inc., operator of CTMirror.org.)

After leaving IBM, he became chief executive officer of Core Informatics, a software startup that Hartford Business Journal included in its 2017 list of best places to work in Connecticut. Thermo Fisher Scientific bought the company the same year.

Amazon and others in the private sector have “made it very easy to envision what that future could look like, if you think about online shopping or online bank services,” Geballe said. “But the journey to get from here to there, and the ordering of initiatives, is very complex to think about.”

Geballe’s office is open to a conference room, where an erasable white board hangs on the wall, running the length of the room. It was covered recently in goals and ideas tossed around in a brainstorming exercise, then numbered as priorities.

Some reflected frustrations by the public in dealing with state agencies, as well as employees knowing what is happening elsewhere in government. Number one: “What if the state developed a way for citizens to be known across agencies by the end of 2022?”

Some changes already have come, pushed by Nicholas Hermes, a West Point grad who is the statewide human resources director at DAS, hired in 2016.

The newest class of state police trainees will be selected from a pool of candidates who were recruited on social media and applied and initially screened online. DAS says the process was cheaper, nearly paperless, and attracted a diverse pool of applicants — with a third more women and minorities — and a 105-percent increase in veterans.

The Malloy administration hired a customer-service expert to improve service at the much-maligned Department of Motor Vehicles, and Lamont won passage of legislation reducing the need for residents to go to the DMV: Drivers’ licenses now are good for eight years, not six; and renewals of vehicle registrations come every three years, not two.

But overall, as agency heads told Geballe as he made the rounds in January and February, the state’s hiring process still is cumbersome, with rarely updated job classifications that are numerous, narrowly drawn and can require their own tests.

Meanwhile, too much of the state’s work still is done on paper, and the information that is collected digitally cannot be easily shared among agencies, Geballe said.

“We’re still largely in a world — by the way, very similar to most every other state — where there are numerous processes which are still paper based, which are still highly manual, which rely on very old custom software,” Geballe said. “That is the status quo.”

He said DAS has capable managers pushing for change, such as Hermes and the state’s chief information officer, Mark Raymond. DAS is now working to centralize and streamline H.R. functions now spread across agencies, just as Raymond recently struck a five-year deal with Microsoft that replaces a dozen separate agency agreements.

The new deal will bring Microsoft 365 software to all state agencies. It is cloud-based, lessening the state’s reliance on servers, improving security and taking a step toward the ultimate goal of easing the sharing of data and documents among agencies. The program also will allow the state to abandon plans for a costly upgrade to its email system.

Geballe said the new administration’s job is to support, broaden and accelerate those changes.

“Breaking from the status quo is very hard I think for people generally, but particularly in government, where you don’t have competition the same way you do in the private sector,  where if you don’t change, if you don’t innovate, if you don’t find new ways to add value, eventually you go out of business and everybody loses their job. That helps focus people’s minds and increase their willingness to change and to take risks. That’s something we certainly need to work on here.”

Union leaders say the workforce is ready, if wary. Glidden said the Malloy administration made overtures about a labor-management review of state government in concession talks in 2011 and again in 2017.

“I would say that largely we haven’t seen that partnership happen, but we continue to have the door wide open,” Glidden said.

“The state is so intractable about its longterm bureaucratic practices. Paper versus electronic records is just one of so many,” Glidden said. “I think all of the stakeholders lament it, but then find the excuses for why we can’t change it. It’s, ‘Well, that’s the way we’ve always done it.’ ”

Glidden is now engaged with the administration on the possibility of some state government professionals teleworking. He’d also like to talk about a classification system that is flexible and provides a career ladder. Currently, the only way to advance in most agencies is for someone to retire, leaving a specific job open.

His predecessor, Robert J. Rinker, co-chaired a labor-management committee that addressed some of the same issues now under review. In a letter to his co-chair in management, Rinker wrote:  “I predict that some day some one will want to change state employment and the report you signed off on wil be the basis for that change.”

The purpose of the AAUP UConn Chapter shall be to further the interest of all members of the bargaining unit without discrimination by promoting the highest standards of excellence in teaching, research, and public service and, by serving as the members’ collective bargaining agent.